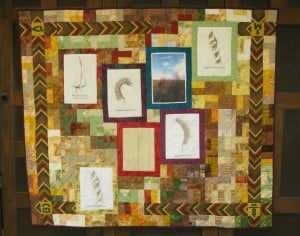 When Jan Urman heard last spring that the Arizona Quilters Hall of Fame had joined with the Arizona Historical Society to sponsor an exhibit called “100 Years, 100 Quilts” in honor of the centennial of Arizona’s statehood, she took the idea of creating a quilt for the show to the Crossroads Quilters in Sonoita.

Recently, the group was pleased to hear that their quilt, titled “The Grasses of Sonoita,” has been accepted into the exhibition.

According to the guidelines of the exhibit, the quilt had to be an original design that reflected the history, people or places of Arizona. The Crossroads Quilters decided to focus on the grasslands of eastern Santa Cruz County.

The centerpieces of the quilt are embroidered panels inspired by the art of local artist Matilda Essig. She generously allowed the group to copy her detailed scans of native grasses, which have been surrounded by blocks of fabric representing the colors common to this area.

“I loved the context that was created by all the pieces of fabric surrounding the images of the grasses,” Essig said, “because they are another metaphor for all the little parts that make up the ‘whole.’ Some of the abstract patterns of the fabric looked like soil and some looked like roots.”

Urman, who chaired the committee to make the quilt, also incorporated a photo, printed on cloth, by Gay Moss of Elgin, showing tall grasses with the mountains in the background.

“Then it was just a matter of incorporating the squares into a unique setting that would reflect the grasslands and the colors of our area,” Urman explained.

The legacy statement that accompanied the quilt stated, “As quilters we are preserving an artistic tradition. As stewards of the land, we also owe much to those who have lived here before us and to this valley which, we hope, will continue to inspire generations to come.”

The 100 quilts that have been selected to be included in the exhibit will be on display at the Arizona Historical Society Museum in Tucson from February until December 2012. From there the quilts will be on exhibit at various museums throughout the state.