This planting was part of our Centennial tree planting project: Celebrating the Past, Planting for our Future, a partnership between our council and the Arizona Community Tree Council (ACTC). Through this partnership, 100 trees have been donated to local Girl Scouts to plant in their communities.

About The Arizona Culturekeepers Program: 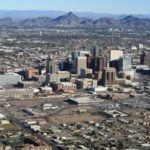 Mar. 29, 2012 06:22 PM The Republic | azcentral.com Painter Ed Mell, known for his vibrant landscapes of the desert Southwest, was named artist of the year at the Governor’s Arts Awards. The Phoenix native recently designed the Arizona Centennial … Continue reading →

An official Arizona Centennial Legacy project luncheon honoring Arizona’s 48 Most Intriguing Women will be held on March 26 at The Phoenician Resort in Scottsdale. Partnering with the Arizona Historical Society and the Arizona Community Foundation  the organization selected the … Continue reading →

Posted: Sunday, March 25, 2012 12:00 am On Thursday, March 29, the Safford Library will host Lisa Schnebly Heidinger, the author of this year’s centennial book called “Arizona: 100 Years Grand.” As the official book of the Arizona Centennial, the … Continue reading →

Come and Meet the 48 Most Intriguing Women of Arizona

Scottsdale, AZ (PRWEB) March 19, 2012 Please plan to attend the luncheon on Monday, March 26 from noon to 2:00 p.m. at the Phoenician Resort in Scottsdale, Arizona, to celebrate the 48 Most Intriguing Women of Arizona. Honorees include: Congresswoman … Continue reading →

Quilters celebrate one piece at a time

Posted: Wednesday, Mar 7th, 2012 BY: Elaine Grant/Staff Writer Globe — This year’s quilt show at the Cobre Valley Center for the Arts features some wonderful examples of how the quilters are celebrating the Arizona Centennial. The celebration quilts, housed … Continue reading →